Merry Christmas from The McKay's!!!

(Anna McConnell) With cash rents not lowering as fast as commodity prices, farmers are still gritting their teeth at high prices per acre at the end of 2015. BUT cash rents are falling, just at a slower pace. "Cash rents really need to come down,” said Doug Martin, an Illinois corn and soybean farmer. “Rents are coming down, but just not probably quite as fast they should.”

Cash rents tend to lag behind the pace market prices fall at due to farmers still having cash to spend from years past, according to Iowa State University crop markets specialist Chad Hart. High-profit producers are able to snatch up land that others can’t afford, which puts those operators at a competitive advantage and keeps rates higher for a period of time.
A number of factors influence cash rents including commodity prices, land values, and gross farm income. Hart expects to see a drop in cash rent/land value within 1–2 years of the gross farm income dropping 2%.

“The USDA is forecasting around a 40–50% drop in income level, which points to a 20–25% drop in cash rents and land values,” said Hart. “We’ve already seen 14% of that land value drop in Iowa.”
In northern Iowa, cash rents of $300 per acre are being reported, but southern Iowa counties are seeing rents drop below $200 in some areas.

In Indiana, cash rents hadn’t seen any kind of cut in 15 years until 2015.  According to a June cash rents survey conducted by Purdue University, Indiana’s cash rent rates averaged $229 per acre on land with average productivity. In west central Indiana, rents as high as $281 were reported while southeastern parts of the state saw a low of $152 per acre.

“We think cash rents will continue to decline in the upcoming year,” said Michael Langemeier, a Purdue agricultural economist. “Something like 5% would be an anticipated price decline.”
With cash rents still a little steep, Langemeier is seeing more interest than ever in flex rent. In Indiana, less that 10% of farmers using that option, but it is something to bring up with a landlord. Just remember that flex rent is variable and very appealing to landlords, he said.
Posted by McKay at 8:40 AM No comments:

As harvest season is over, fall tillage is completed and cleaning of farm machinery is finished, the next chore is to continuing to improve the land owned and operated by McKay Farms. It is important to pay close attention while harvesting fields to see any low spots in fields, dead trees around the ends of fields or anywhere needing more drainage. The early completion of harvest 2015 allowed the family to spend more time on improving the land and improving acreage for future generations. 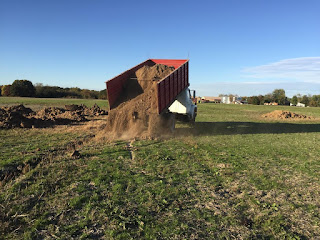 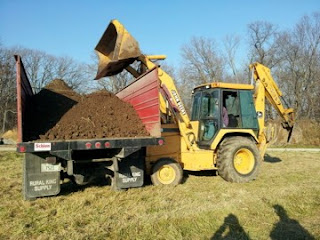 Time to Clean the Farm Equipment!

Harvest 2015 is over and preparations are made each day for the coming year. The beautiful weather lately has been great to allow us to clean our farm machinery before storing for the long winter ahead. We have most of the equipment cleaned up but still have to finish a few tractors and the hardest piece- the combine.
Posted by McKay at 5:30 AM No comments:

Favorable conditions could bring farmers back to wheat

(Illinois Farmer Today) Ideal fall weather conditions may have helped shorten the memory of Illinois wheat producers who have endured two years of trouble with the crop. Many observers expect planted acreage to be down somewhat this fall. But the dry fields, combined with timely corn and soybean harvest, coaxed some back to their planters. “Conditions have been really good. October has been dry,” said Craig Ratermann of the cooperative Gateway Farm Service. “Coming off the past couple years, though, with wheat quality issues, that’s going to keep our acreage down.” While yields were good this year, quality was a problem. Excessive rainfall in late spring ushered in head scab and other diseases. That resulted in low test weights, vomitoxin and other problems. Some producers reported they were lucky to break even when hauling some loads to the elevator, as prices after dockage barely paid for fuel, seed and inputs. “Test weights were a little light,” Ratermann said. “We had more problems with sprout damage this year. There was some vomitoxin, but vomitoxin was worse the previous year.”
Pioneer agronomist Scott Eversgerd doesn’t believe acreage will take a big hit. He credits the pleasant weather conditions along with a growing commitment to wheat among some growers.

“From an acreage standpoint, we’re probably close to fine,” he said. “But the number of growers growing wheat is probably down. Those who grow wheat have planted equal acres or a few more.  “There are also some growers who aren’t planting any. At the end of the day, acres will be flat or maybe slightly down, but not a huge adjustment down.” Kyle Brase, who farms near Edwardsville in Madison County, planted less wheat this year. Quality issues with the 2015 crop, however, weren’t the reason for that decision. “We are down just a little bit but mostly just because of rotation,” he said. “We didn’t have any other decision than that other than that’s how the crop plan worked out.” Some of his neighbors are foregoing planting wheat this year, but Brase doesn’t see that as part of a long-term trend. “There are a few of them shying away, but mostly only because of the trouble we’ve had the past couple of years, he said. “We’ve had quality issues two years in a row.”

Farmers unhindered by wet fields were able to get their crop into the ground in a timely manner this fall. But for some, the pleasant conditions weren’t enough to change their minds. “The planned acres for guys doing rotation are mostly done,” Ratermann said. “If it weren’t for the last couple of years with quality issues, we’d see a lot more wheat going out. But it’s left a bad taste in people’s mouths. . . . We’ll still have a crop, but it’ll be below-average acres.” Eversgerd said the dry conditions are good, for the most part. “With the exception of the west side of Southern Illinois, the other part has gotten pretty good moisture,” he said. “The wheat has gone in in great shape. Planting conditions have been very good. So I think who had been thinking about it worked the ground, it worked great. “Wheat’s getting off to a good start. That all puts a little optimism out there, I guess. “In St. Clair County and that part of the world, they’re really dry over there. There are actually a few guys who quit planting because it’s too dry.”
Posted by McKay at 11:12 AM No comments:

We would like to Congratulate our grandma and mother on celebrating her 90th birthday. We took her out to a nice dinner at Richards Farm Restaurant in Casey, IL. 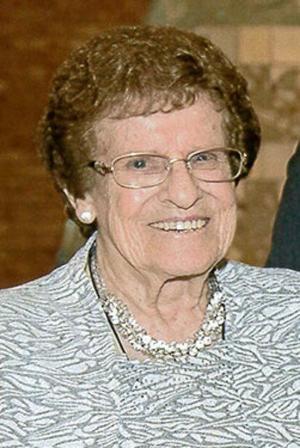 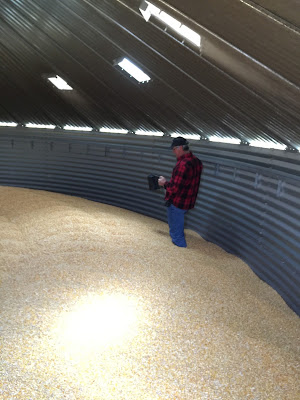 Dan McKay is inside the new grain bin testing the moisture of the corn. Results came back in average ranges of 14.8 to 15.9.  Below is the maximum storage in months for shelled corn form USDA research. Most of our stored corn will be hauled away during the winter or early spring months. 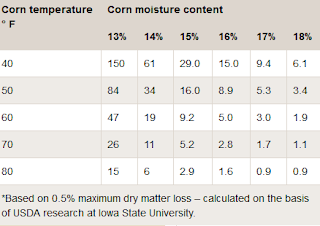 Check out our new video of using auto steer to disk a bean field just outside of Beecher City. It is amazing how technology is being utilized in farming!
Posted by McKay at 8:20 AM No comments:

(Source: University of Illinois) Cash rents on professionally managed farmland likely will decrease for the 2016 cropping year. Rents on non-professionally managed farmland likely will decrease as well. However, projected rent decreases are not large enough to cause farmers to have positive returns in 2016 given current projections of commodity prices and costs. The lagged relationship between returns and cash rents still exists.

Fall is great time of the year to begin land improvements to existing fields. By analyzing yield monitors during harvest season, you can determine low spots within the fields and begin to improve for the upcoming season. Many fields will also have fallen trees on the edge of the fields which will need moved before fall tillage or spring planting begins. There has been beautiful weather so far this fall to allow us to continue the work.

Great news for farmers as Federal court blocked small waterways form being subject to EPA and Army Corps. Local US Representative Rodney Davis issued this statement: "This is great news for the farmers in my district who stand to have the water in their irrigation ponds and drainage ditches regulated by the EPA. The WOTUS rule is an egregious overreach by this administration that must be stopped. ‪#‎DitchTheRule‬." Read additional information here.
Posted by McKay at 11:46 AM No comments:

Check out our time-lapse!

We quickly created a short time-lapse of Blake McKay driving our John Deere combine during the recent harvest season. Check it out on Youtube now!
Posted by McKay at 5:00 AM No comments: 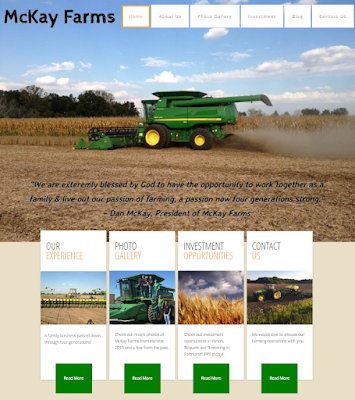 We are excited to announce the launch of our official website: www.McKayFarms.com. The website provides more information about McKay Farms history and experience. We hope to keep providing you more information and our experiences here on our blog.
Posted by McKay at 11:15 AM No comments:

Illinois Farmer with Cancer is helped by Neighbors 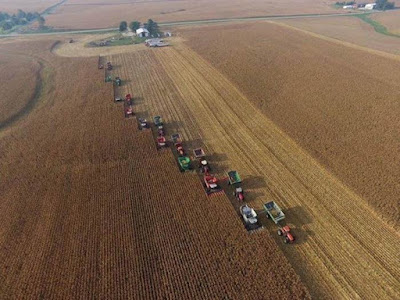 An Illinois farmer, located northwest of Peoria, with terminal cancer was helped by his community making national news. 10 combines and 16 semis assisted cancer patient Carl Bates who farms around 450 acres. This type of selflessness can be seen all around small farm towns in America. We hope more media outlets will pick up this story and similar stories to show the large hearts farmers have. Please continue praying for Carl Bates and their community of Galva, IL.

Click here to read the entire story on Today.com
Posted by McKay at 5:00 AM No comments:

With Harvest 2015 completed, preparations immediately begin for next year's season. Ground is being work everyday in the available fields but many fields' soil is being tested and not ready for tillage. Lime will soon be added to many fields to neutralize the acid in the soil so crops can reach maximum yields next year. Fall tillage is very important and will save the farm lots of time in the Spring so we are blessed to be able to prepare the land now.

Nearly perfect weather throughout the months of September and October has allowed Harvest 2015 to finished at a record pace on October 3rd, 2015. Dan McKay and his sons worked day and night until the job was complete. We have to thank God for safety during the harvest season and for the beautiful weather to help deliver another successful harvest.